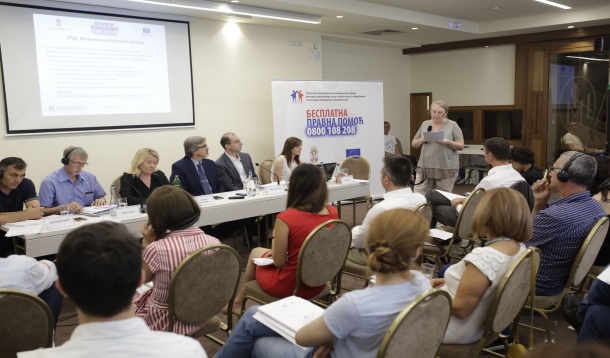 The author of the Report on fraudulent property transactions, an independent expert for social matters Mary Walsh, presented the findings of the report, main institutional obstacles for solving cases and recommendations mainly referring to increasing the capacity for the implementation of international standards in open cases.

In the introductory speech, the Assistant Director of the Office for Kosovo and Metohija Zoran Bojovic pointed out that the legal aid project is almost the only instrument enabling internally displaced people from Kosovo and Metohija who are victims of fraudulent transactions to protect their rights.

Head of the Group for Justice of Kosovo and Metohija Igor Popovic said that even after 18 years have passed since the conflict ended, the protection of property rights is an unsolved issue and emphasized that this Report represents a unified insight in the actual state of exercising property and other rights of IDPs in Kosovo and Metohija issue.

Legal advisers on the project Jasmina Zupanjac, Vasilije Arsic and Zarko Gajic presented cases they meet with every day on the field representing IDPs in courts. All the panelists and representatives of relevant institutions who participated in the discussion agreed that the involvement of the international community in the protection of property rights of IDPs is vital, as well as the continues availability of legal aid for IDPs through projects of this kind in purpose of resolving a caseload of property and other claims.

The Report on fraudulent transactions is the second report that the free legal aid project presents in purpose of a better and more systematic perspective of the entire process of protection of property rights of internally displaces people, refugees and returnees upon readmission agreements. This panel discussion gathered the representatives of UNHCR, Danish Refugee Council, NGOs Sveti Spas and Bozur and the project’s beneficiaries the Office for KiM.