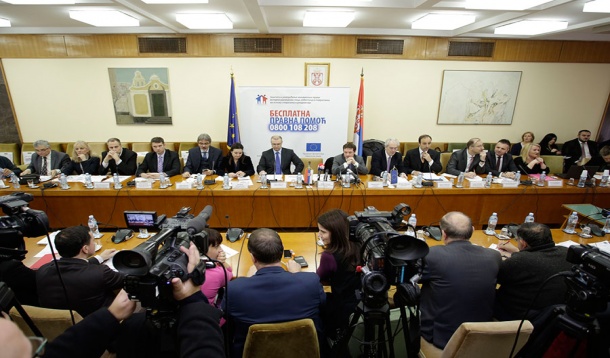 The Legal Aid aimed at protecting and promoting property rights of IDPs, refugees and returnees under the readmission agreement

This two-year project is funded by the EU with EUR3.65 million, and is a follow-up to four earlier projects implemented by the EU Delegation to Serbia and the Office for Kosovo and Metohija.

Team leader Declan O’Mahony said at the conference that there were at least 60,000 property return requests made by IDPs from Kosovo to which local courts in Kosovo failed to respond, adding that such a situation resulted in huge backlog of cases impossible to process within a reasonable timeframe. According to O’Mahony, within the EU’s project aimed at providing free legal aid to IDPs, refugees and returnees under readmission agreement, four separate units will be set up in Belgrade, Nis, Kraljevo and Valjevo with two additional departments in Kosovska Mitrovica and Gracanica.

Head of Operations at the EU Delegation to Serbia Nicolas Bizel described the project, which was already under implementation, as highly relevant as the right to legal aid was among the fundamental EU rights. He said that the Delegation would continue to be Serbia’s key partner in resolving that issue.

Deputy Head of the Office for Kosovo and Metohija Dusan Kozarev said that there were 204,049 IDPs from Kosovo in Serbia, with estimates of another 18,000 in Kosovo. He warned that the abandoned houses, which once belonged to Serbs and other non-Albanians, were being systematically destroyed, adding that the Kosovo Property Agency is processing some 40,000 requests for the return of occupied property. Also, he said, there were around 18,000 compensation, damaged or destroyed property claims lodged with courts.

To read more, please follow the link Delegation of EU in Republic of Serbia

And Office for Kosovo and Metohija, Government of Republic of Serbia

This event was covered by: